I recently set myself the challenge of drawing 40 different drawings in 40 consecutive days.  The subject was Greek Mythology and the penultimate drawing was of Danae.  It is very unBritish of me to blow my own trumpet but I rather think that my drawing of Danae was my most successful drawing in the series.  Even as I was drawing it, I was thinking to myself that it had the potential to make an interesting block print.  I, therefore, set about doing just that.

I liked the composition of the figure in my original drawing so I replicated the composition onto the lino block – reversing it, of course.  I then surrounded the figure within a shape that would print entirely black in order to suggest both the night and the chamber in which Danae was imprisoned by her father, King Acrisius.  I then decided to frame that black shape within rough, wavy lines to suggest the sea that Danae and baby Perseus were cast adrift in so that the black shape also alluded to the box in which they were placed.

My personal taste when it comes to block printing, which has informed my own style in carving lino blocks, is for the carving to be a little rough and choppy.  If I want smooth lines and clearly demarcated contrasts between the white and black areas then I choose a completely different medium, such as pen and ink, for that piece of art.  Block printing is my medium for creating texture in my art.  I, therefore, do not carve out the white areas of my block entirely.  I want little lines and pieces to remain.  With block printing, you can take away but you can never add back in so I get myself to a certain point with my carving and then I take a print from it to inform my decisions about any further cuts.  This was the first cut and pressing of my Danae block print. 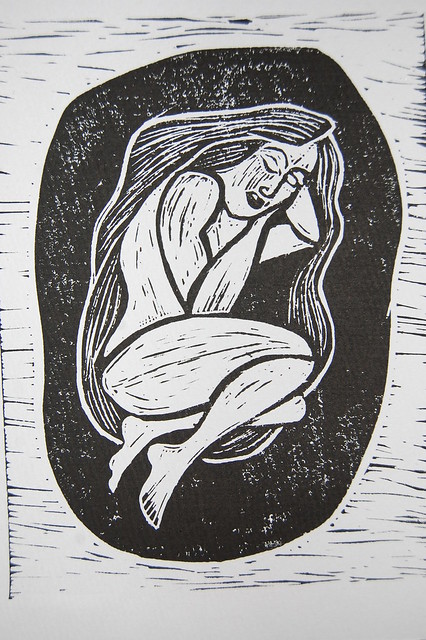 That print – which I did not use the baren on enough, hence the patchiness – told me that I liked the dark, shaded area of the hair and that I didn’t want to cut into it any more; that I liked the random, wavy, choppy lines framing the entire image as they were; that I didn’t like the lined area on the face, which I had left to represent shadow, or some of the lines on the thigh.  That helped me decide which areas to continue carving out.  This led to a couple more prints and carves until I arrived at a print I was happy with. 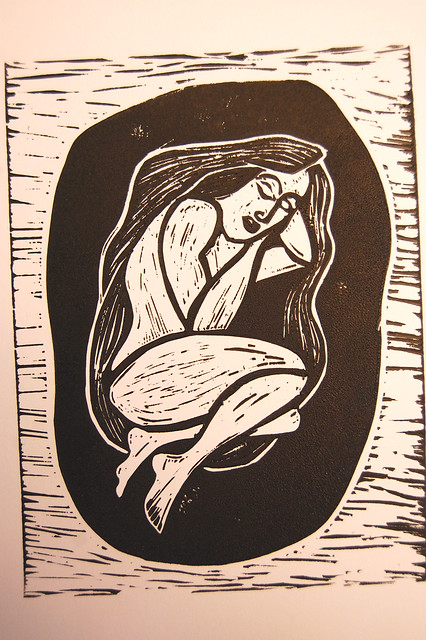 I then used one of my failed prints to create a mask to place over the final block prints.  The mask protected areas of the print I wanted to stay monochrome while I sprayed and spattered the rest with gold ink.  This time I improvised a spray booth out of a large cardboard box since last time I sprayed with metallic ink I had to scrub my kitchen for almost two hours.  The gold ink, of course, represents the shower of gold that Zeus transformed himself into in order to impregnate Danae.  I rather like the effect of the glitter of the ink against the stark, bold black of the ink and also the randomness of the spatter juxtaposed against the strong lines of the monochrome printed image.

Here’s the final print.  Let me know what you think. 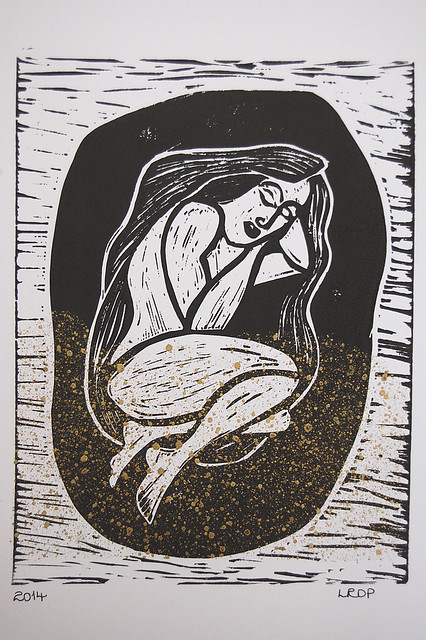 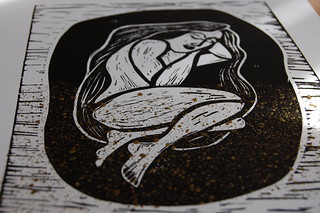 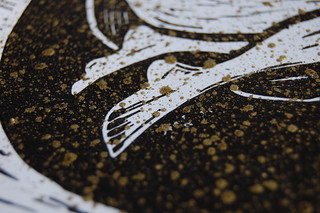 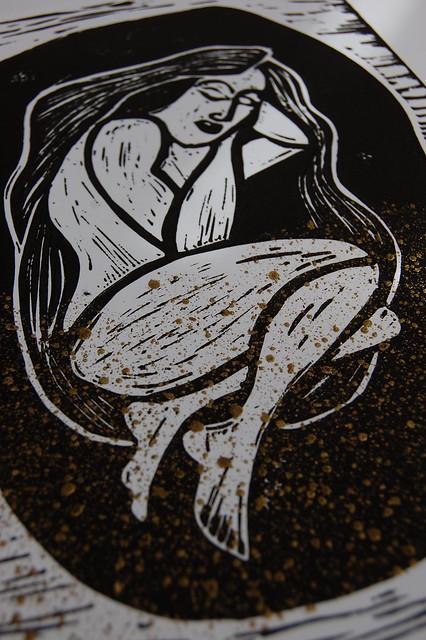 Let's chat! Leave a comment and I will reply. Cancel reply

This site uses Akismet to reduce spam. Learn how your comment data is processed.