I thought it was time I tried a more expressive face, one conveying a specific emotion.  The result is Rachel.  The face is not mine but the facial expression is.  This is my “What the actual heck?” face.  With four kids and two cats getting up to all sorts of shenanigans in the house this summer, this is a face I make rather often.  I took a selfie in order to see how the eyes and mouth looked and used that as scaffolding for the rest of the drawing.  In my selfie, my teeth were actually concealed but I decided to challenge myself by including them in the illustration.  Open mouths get added to ears as things I really need to work on. 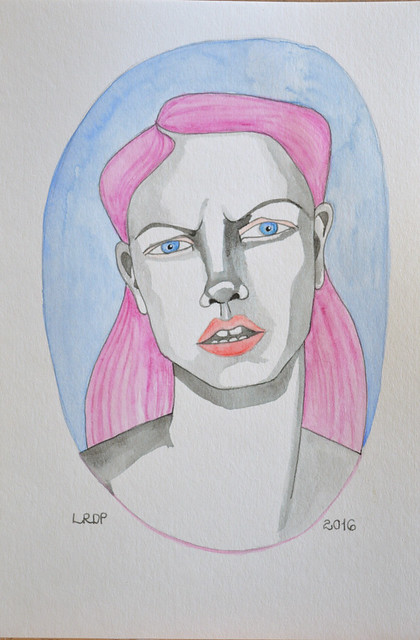 I am not sure my wolf would terrify Little Red Riding Hood if he jumped out from the trees at her.  If he threatened the Three Little Pigs they would probably dissolve into tears of hooting laughter.  My wolf looks dorky despite his pointed teeth.  I decided to work in a grey colour scheme for the wolf which I think worked except that I wish, in retrospect, that I had made the tail darker.  I have no idea why I didn’t.

There’s no tactful way to write this: llamas were not blessed with beauty.  They are very peculiar looking animals, like long-necked sheep with bad dentistry.  Really bad dentistry.  Worse even than we British people.  I think I definitely managed to capture the awkwardness of the llama’s proportions in my painting.

The cows of my childhood were all Friesians* as that was the breed in all the dairy farms that were on the outskirts of my home town.  Therefore, as soon as I plucked the word “cow” out of the bag of random animals I knew I would be painting a black and white cow.  I decided to try mixing the monochrome with pink in order to see how I liked that palette.  I really love how the colour scheme turned out.  I think this is a combination I will use again.  I used a pearl pink for the muzzle area and the udder to make those features pop.

Three quarters of the way through. Woohoo!

*I think in America, Friesians are known as Holsteins.  Maybe.

Largely because I had already painted it, I decided to have another stab at using the background painted with the palette knife.  It didn’t work so well with the pig (#70) but I was determined and it seemed like it might work better for the whale.

I was so focused on making the rough texture work that my painting of the whale went awry.  The shape got splodgy and wonky so I ended up with a really blobby whale.  I wished I had recreated the shape of the whale I had created as a lino block print just over a year ago.  We had an amazing encounter with some humpback whales last summer and I really wish I had concentrated my mind’s eye on that memory rather than just blindly swiping paint across the paper and ending up with this mess.

Oh dear.  This is why it is called a challenge.

Thanks to ‘Guardians of the Galaxy’, my kids are now obsessed with raccoons.  They are desperate to see a wild one.  My middle two sons even had a plan – which I thankfully uncovered – to leave food on the porch to lure a raccoon.  I have only seen a raccoon in the wild once.  It was scuttling across the road one night when we were driving in Washington DC.  My husband thought it was a hunchbacked dog.

My raccoon is intended to look cheeky and sneaky and mischevious as that is what I imagine raccoon personalities to be like.

Suddenly this challenge has gone all Old MacDonald’s.  After so many exotic and even some downright bizarre critters, I have had a run of three farm animals in a row.

I have been doodling sheep for years.  They are easy to draw, of course, and their abundance in Scotland meant they always sprang to mind when I was looking for a subject for a drawing.  Once, when on a vacation on the island of Mull, the intimidating gangs of marauding sheep there inspired me to draw a visual story about ninja sheep.  The sheep I painted for the challenge is precisely like the sheep I drew all those decades ago.  Clearly my sheep style has not evolved much.

My 8 year old literally danced around the kitchen when I pulled the name “horse” out of the random bag of animals.  He has been fantatical about horses since he was a toddler.  Back home in Scotland, he did a series of riding lessons and absolutely loved it.  He was trained on a horse named Gigha – after the island – and always looked so titchy on top of the big beast.  They would do exercises in the arena before going for a trek along the side to the loch.  When we told the boys that we were emigrating to America, one of the first things the now 8 year old did was research horses in Pennsylvania.  Upon learning that the Amish breed miniature horses, among other livestock, he became obsessed with the idea of saving up enough money to buy a falabella.  His rationale was that he would be able to afford its care because it could live in the house with us instead of requiring stabling.  He is also obsessed with unicorns and pegasus and he has about as much prospect of getting one of those as he does a pet horse.  We had to burst his bubble.

As he was so excited about the horse painting, I allowed my son to select the colours for the horse painting.  He chose shades of blue with an orange background.  He also requested that the horse be holding a flower.  The proportions in this painting are bonkers.  Sure, it’s a miniature pony but even so I don’t think those stubby legs could support that portly body and that massive head.  I also think the front legs (which I have made into arms) are much longer than the back legs.  Oh well.  Creative license with biology.

For Crazy Critter #70, I decided to try something a bit different and used a palette knife to create the background.  I quite liked the choppy effect of the paint and the way it made the colours interact with each other.  What I did not take note of, however, was how textural the background was.  This became apparent when I started to paint the animal and the marks of the palette knife were accentuated.  Oops.  As tempted as I was to just start over, I decided to continue.  After all, this challenge is about me improving my skills with painting and mistakes are a golden opportunity for learning.  If I am prepared to blog about my successes and my mediocre efforts then I should also blog about the failures too.

Pigs are my most consistent favourite animal.  I have been hoping for a pig to turn up for quite some time.  This pig is painted in pearlised pink.  That decision probably just made the texture of the underpainting show up worse.  Oops.

King of the Jungle?  Maybe not.  My lion might just pass as a younger prince.  The one that just causes lots of embarrassment to his family perhaps.  He certainly doesn’t look majestic or intimidating or ferocious.  The photo may not capture it but the lion is painted with a pearlised yellow paint that provides a nice shimmer and his mane is dotted with gold and bronze.  The ostentation of the metallics are the most regal thing about this lion.