This is my final Inktober drawing.  Yes! I have finally filled both small sketchbooks. I had a terrible sinus infection this weekend and thought I may not get around to drawing my last illustration yesterday, which would have been the first time since 1 October that I had not completed a daily Harry Potter drawing.  However, I pushed myself to put pen to paper precisely because I did not want to falter at the very last.  I did, however, manage to smudge the ink with my hand.  Oops.

My final prompt was Newt Scamander who, though mentioned in the Harry Potter series, does not properly appear in any of the novels.  He is, however, the main character in the movie ‘Fantastic Beasts and Where to Find Them’.  It’s a bit of a cheat but let’s not split hairs.  Newt is a magizoologist and an author of a book about magical creatures.  I chose to draw Newt with his suitcase which, thanks to an extension charm, contains a menagerie.  He is holding a niffler and Pickett the bowtruckle.  Newt definitely looks more like a young Michael York than he does Eddie Redmayne.  Let’s blame my sinus infection for that. 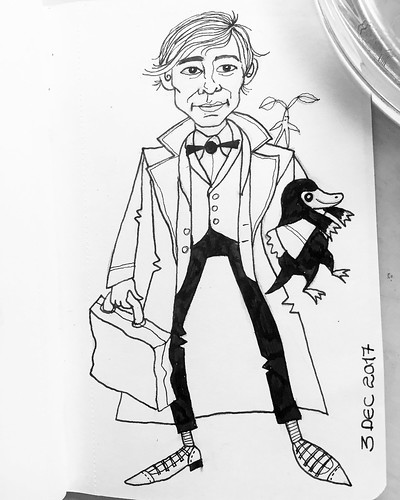 So I have completed my personal Inktober challenge, which of course lasted far longer than the month of October.  After 64 drawings, I definitely feel like I am coming closer to developing my own illustrative style – which is not to say that I won’t be changing things up from time to time but it is pleasing to have a sort of signature style, I think.  Drawing daily is, however, pretty demanding.  There were days when it was definitely tricky to get a drawing done.  Each drawing took a maximum of just 20 minutes but some days finding even that brief gobbet of time was difficult as was finding a spare 10 to 20 minutes that aligned with me feeling in a creative mood.  But I did it and it is done.

Stan Shunpike is the scruffy youth who works as the conductor on the Knight Bus.  This is a magical, triple-decker bus that transports wizards at high speed and undetected by muggles.  Stan was my penultimate illustration in my series of daily Harry Potter drawings. 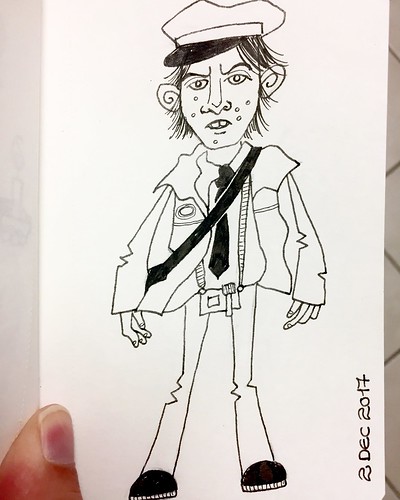 I cannot believe that we are now in December and yet I am still working through my kids’ Inktober prompts.  All because I cannot count pages accurately.  Anyway, the end is in sight.  Only a couple more drawings after this one.  This illustration is of Bathilda Bagshot, an aged witch who is a historian of the wizarding world.  Harry and Hermione encounter her when they visit Godric’s Hollow but all is not as it seems…. 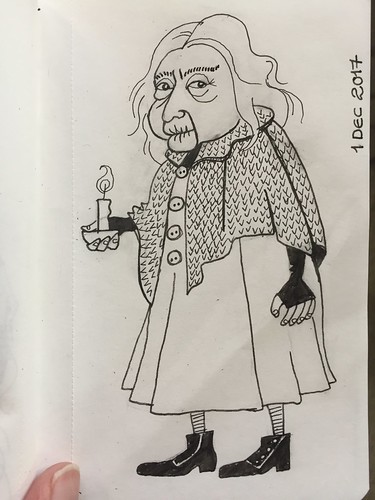 I was dreading having to draw a Dementor.  I have a history of doing a sucky job of portraying these horrid creatures.  I drew one for last year’s Inktober, however, that was so wretched (not in a good way) that I knew that this year’s Inktober Dementor could only be an improvement.  JK Rowling saw the Dementors as being a personification of depression.  Therefore, these wraith-like creatures rob people of their happiness and joy and leave them feeling in a state of despair.  They can also suck out people’s souls which is why they are used as guards at Azkaban.  I tried to capture the gaping soul-sucking mouth and the sense of decay in my illustration.  Still not a very good drawing but definitely a step in the right direction compared to last year’s effort. 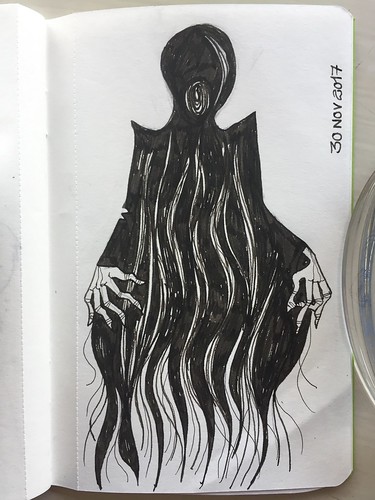 Crookshanks is Hermione’s pet cat. Since he possesses some unusual powers and was purchased from the Magical Menagerie, he is probably a familiar as well as a pet.  Scabbers, on the other hand, is a pet rat who has been in the Weasley family’s possession for some years and who accompanies Ron to Hogwarts in his third year.  Crookshanks knows something is very much awry with Scabbers and tries to communicate that to the humans in vain.  That is why I chose to draw Crookshanks looking a bit grumpy and frustrated.  Meanwhile, I drew Scabbers looking a bit shifty and nervous.  That is, of course, because he is not a rat at all but is in fact an animagus, and is a wizard in disguise. 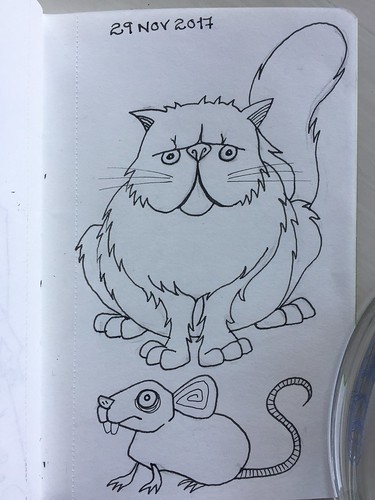 Troll in the dungeons!  A troll features in the very first book in the Harry Potter series.  He’s a bit gormless and shambling but he could probably still pulverise the students and staff of Hogwarts.  It was fun to draw his weird proportions and his warts. 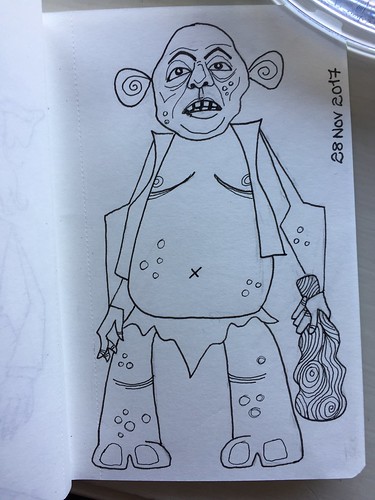 All caught up on Inktober blog posts, I can now turn to today’s prompt which was to draw a Gringotts Goblin.  Gringotts is the wizarding world’s bank and it is owned and operated by goblins.  The bank and its goblin staff provide the background to some great set pieces in the Harry Potter series.  Gringotts Bank was also my family’s favourite ride when we went to Universal Studios a few years ago.  Even when we were queuing to get on the ride, we loved seeing all of the detail in the bank, including the hard working goblins at their desks.  I based my illustration on the goblin who appears to be in charge of the bank on the day that Harry first visits his vault. 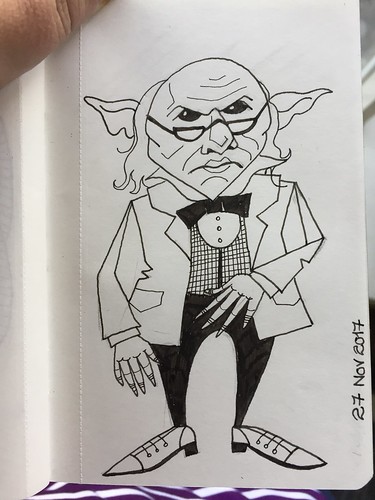 Yesterday’s prompt was to draw Aragog.  Aragog is an acromantula, a magical creature in the form of a giant spider.  He had been Hagrid’s pet but moved to live in the Forbidden Forest as the leader of a colony of acromantula.  Although he is a monster and is pretty intimidating in ‘The Chamber of Secrets’, my kids and I all feel rather sorry when old Aragog dies.  Indeed, my 8 year old chose to buy a cuddly Aragog as a souvenir when we went to Universal Studios a few years ago. 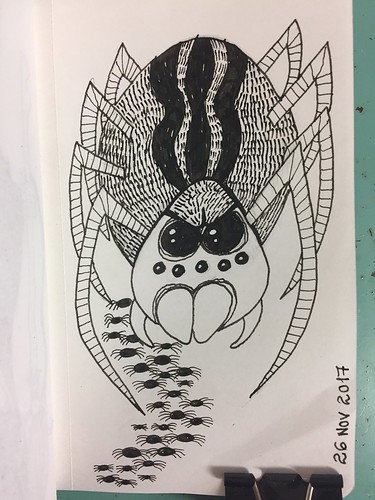 Rolanda Hooch is one of the minor characters in the Harry Potter series.  Indeed, while she appears in multiple books, she only features in one of the movie adaptations.  Madam Hooch instructs the Hogwarts students in flying and coaches and referees quidditch.  As such, I would have been one of her most rubbish students. 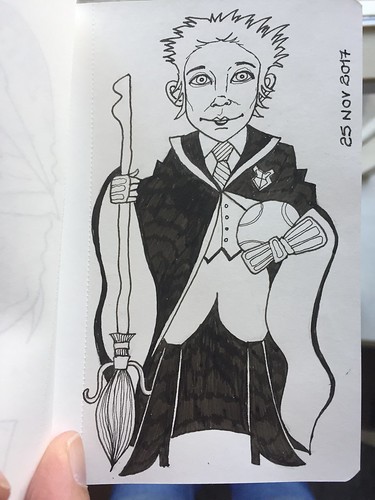 Remus Lupin is one of my sons’ favourite Harry Potter characters and my ten year old loves werewolves so I was not surprised to find that one of my prompts was to draw Lupin in werewolf form.  Poor Lupin does not remotely enjoy being a werewolf.  For him, it appears to be akin to a disease that he tries to treat in order to minimise the symptoms.  I, therefore, feel very sad for poor werewolf Lupin.  The transformation clearly causes him emotional anguish as well as physical discomfort. 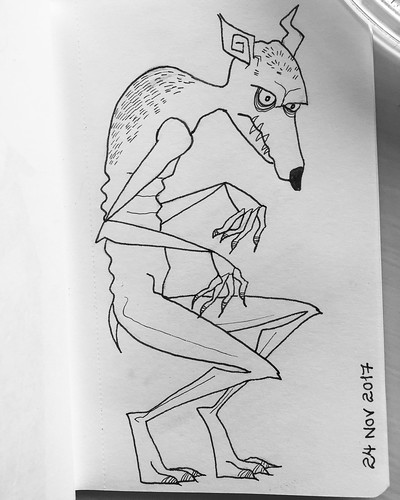