This is the final page of my Brooklyn Art Library Sketchbook.  I chose to conclude with the story of the Pied Piper of Hamelin.  The Piper is employed to drive rats out of the city with his magical music playing but, when the residents refuse to pay him for his services, he uses that same enchantment to lead their children away.  It’s a pretty chilling parable about the importance of paying ones bills.  In some ways, therefore, the Piper is a figure of Death or Vengeance and a pretty creepy bloke.  I chose to depict the Piper when he is enchanting the rats before leading them to the river to drown them.  I was aiming for jaunty yet sinister. 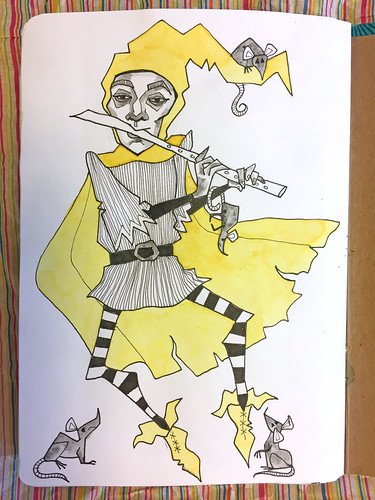 Ack.  Frustratingly, this is my penultimate drawing in my Brooklyn Art Library sketchbook and I think it is my weakest drawing in the series.  A note about my method: I lay down some very basic shapes with pencil and then move directly to working with ink pens to build the illustration on top of that scaffolding.  Not going over the top of predetermined pencil lines can definitely produce some wonkiness at times.  Such is the case with this illustration as the proportions went askew.

Jack is one of those fairytale antiheroes.  We root for his “rags to riches” transformation, rewarded after all for the potentially foolhardy decision to trade the family cow for the beans, but the source of his new found wealth is theft from the giant who lives at the top of the beanstalk.  In some versions, the giant is a bloodthirsty brute who terrorises people so maybe that makes Jack’s decision to steal his magical harp and gold egg laying goose a bit less immoral.  Geese, as we know, are aggressive and vicious enough to be employed to guard property so Jack is really taking a risk kidnapping a goose and shimmying down a beanstalk with it. 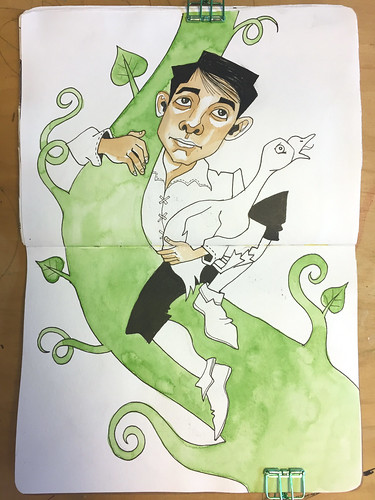 The tale of Cinderella is, of course, probably the most famous rags-to-riches story.  I, therefore, chose to illustrate the transformative moment: poor, oppressed, beaten-down Cinders slipping her foot into the magical slipper as proof that she is the young woman the prince fell in love with at his ball.  This is the moment when she shifts from abused stepdaughter to princess.  That “happy ever after” is obviously where the story ends so let’s just imagine that Cinderella does experience agency and freedom when she moves to the palace. 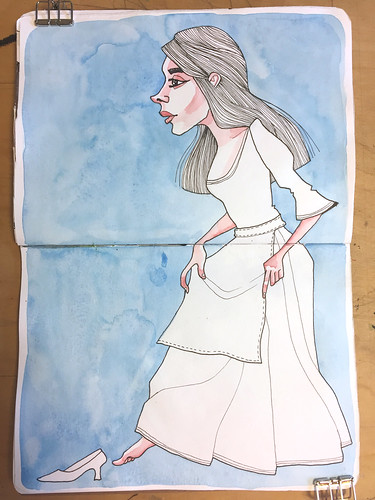 This is my illustration of the tale of the Frog Prince.  There are variants of this tale but the core is that a prince has been transformed into a frog and the spell can only be broken by a princess, either because she befriends him, or kisses him, or hurls him against a wall.  Considering these possible narrative outcomes, I decided to draw my princess contemplating just what to do about this enchanted frog.  I am pretty sure the frog is gulping and hoping she doesn’t chose the third option. 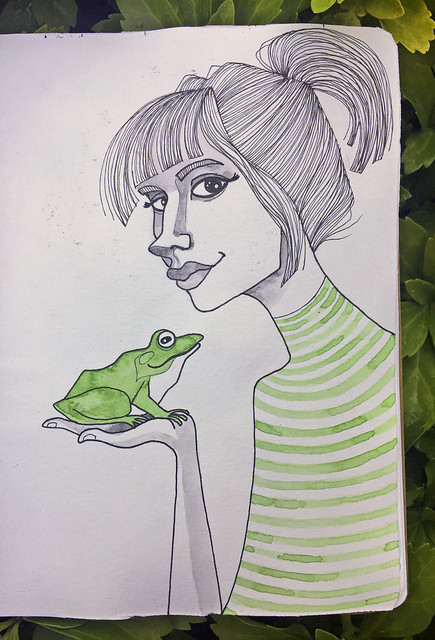 I seem to be on a roll with fairytale princesses.  This is my illustration of Snow White.  I decided to go a bit more contemporary while still retaining an echo of the iconic Disney version, such as the headband, black bobbed hair, and glossy red apple.  The skull shape in the bitten apple is a bit hackneyed but it’s effective shorthand for the narrative. 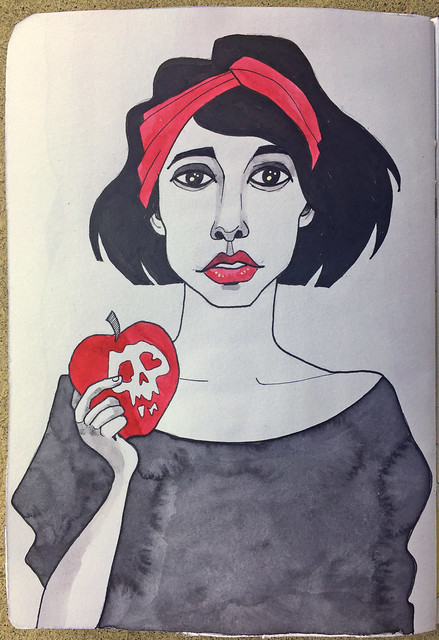 There are not many fairytale princesses whose experiences I can relate to.  The Princess who cannot fall asleep because of the discomfort of a pea tucked beneath many mattresses is definitely something I can identify with.  I have been a terrible sleeper for most of my life.  I am a fitful, very light sleeper, so the tiniest bit of discomfort, whether texture or noise or light, gets magnified when I am trying to sleep and prevents me from being able to wind my brain down.  I hoped to convey the Princess’ exhaustion, make her look frazzled and resigned to an evening of zero sleep.  All four of my kids independently said that the pea looked like an eye peeking out from between the mattresses.  That obviously wasn’t deliberate but maybe it works. 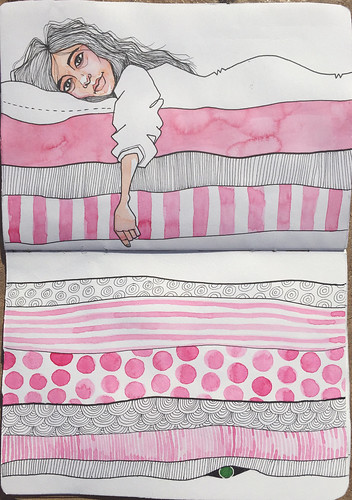 This is the second time within the pages of this sketchbook that I have illustrated a figure who is falling asleep.  The first was Goldilocks who was falling asleep in a bear’s bed after all of her antics; this illustration is of Sleeping Beauty who is entering an enchanted slumber after pricking her finger on a booby-trapped spindle.  I included the spindle in the drawing and also the thorns that grow up around the castle to keep potential rescuers away and prevent the spell from being broken.  Quite honestly, as someone who suffers from insomnia, the idea of napping for a hundred years doesn’t sound that bad as curses go. 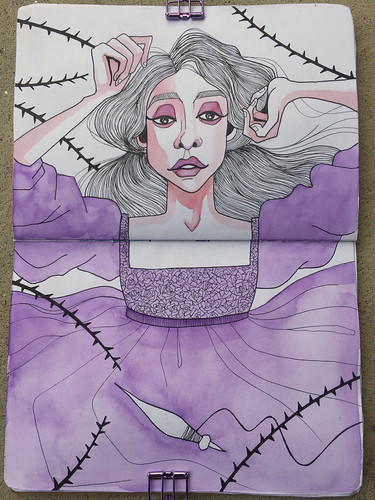 The Big Bad Wolf forms the overlap in the Venn diagram of fairytales since he appears in both the stories of Little Red Riding Hood and the Three Little Pigs.  I, therefore, had to illustrate the three little pigs on the next two page spread in my sketchbook.  Pigs are one of my favourite things to draw so I had fun creating these three characters.  I was aiming for the straw-building brother to look smug and the stick-building brother to look supercilious so hopefully that translated.  I wanted the smart brother who built his home from bricks to look satisfied in his work.  My previous illustrations have been very colourful so I chose to pare this one back and use just a wee bit of colour for each of the building materials.  I am having so much fun with this fairytale series! 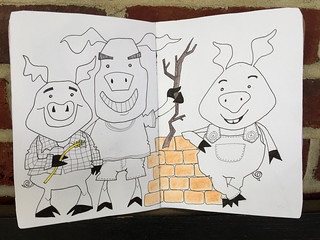 I am sure you were able to predict which fairytale character would show up in my sketchbook next.  Indeed, having drawn Little Red Riding Hood on the previous pages, I felt compelled to illustrate the Big Bad Wolf as my next illustration.  I wanted to make the wolf look lean and rangy, maybe a little desperate and rabid, as a way to convey his villainy but without tipping over into making him too werewolf-like.  As you can probably guess, I had a lot of fun doing the linework for his coat.  This is my favourite illustration in this sketchbook so far. 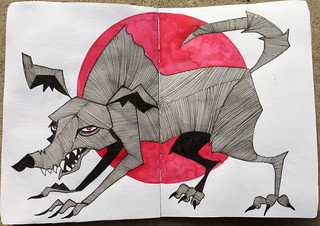 I have reached the centre of my sketchbook!  Little Red Riding Hood is the fairytale character I have drawn more than any other.  She is one of my “go to” subjects when looking for something to draw.  It was, therefore, fitting that she become the “centrefold” character in my sketchbook.  I am plagarising myself again since I took my inspiration from one of my Drawlloween illustrations from last October.  She is only the second figure I have drawn in profile in this sketchbook and I have a habit of drawing more characterful noses when drawing people in full profile.  I happened to be binge watching ‘Good Omens’ when I drew the pencil scaffolding lines so the nose was a little inspired by Michael Sheen’s impish, upturned nose.  I think of this Red Riding Hood as being a little older, wiser, and more experienced at avoiding or hunting big bad wolves. 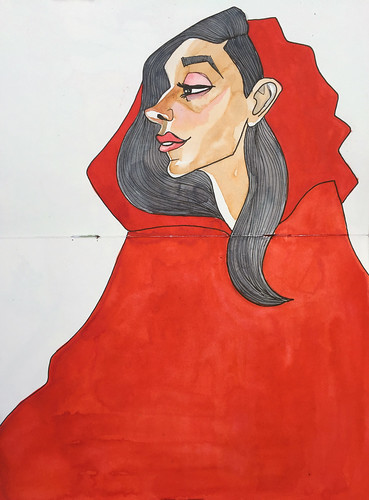